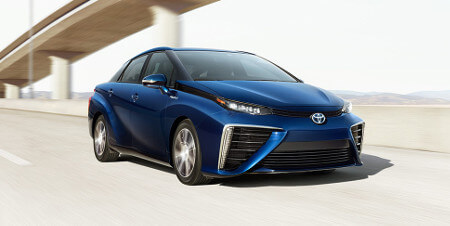 The forward-thinking 2016 Toyota Mirai combines modish beauty with unparalleled brains. Its rugged and futuristic front end makes it look sporty and auspicious, but under the hood is something just as science fictional. The Toyota Mirai boasts a hydrogen fuel cell, which allows it to achieve zero emissions, incredible fuel economy, and extended driving range — all without sacrificing power. The Mirai is not available everywhere, though, and so we are proud to announce that the 2016 Toyota Mirai is available at Toyota Santa Monica.

Get to Know the Toyota Mirai

The 2016 Toyota Mirai offers the same power and performance that drivers of Toyota sedans have come to expect from their vehicles. Unlike those conventional cars, though, the Toyota Mirai uses a revolutionary hydrogen fuel cell vehicle — which makes it a zero emission vehicle.

The Mirai can accommodate two tanks of hydrogen, each with an effective range of 312 miles. So at 624 miles, the Mirai boasts the same range as a high-end electric vehicle. But it wildly differs from electric vehicles in convenience. The Mirai only takes five minutes to refuel, and each Toyota Mirai comes with three years of complimentary fuel.

The 2016 Toyota Mirai represents the incredible next step in the evolution of more fuel efficient vehicles. That makes its availability at Toyota Santa Monica a huge deal — this incredible piece of technology is only being offered at eight Toyota dealerships. That means that not just anyone can acquire this fine machine, and drivers in the Los Angeles and Santa Monica area may be some of the lucky few who get to drive into the future before all their friends.

Request Your Mirai with the Help of LAcarGUY