• Well-equipped two-door model starts at $33,990
• Sunroof and Navigation models have MSRPs of $35,490 (two-door) and $36,090 (four-door)
• Most powerful Golf production engine to be sold in the U.S.
• Six-speed manual transmission and all-wheel drive standard
• Predicted fuel economy of 19 mpg city, 27 mpg highway
• Bi-Xenon headlights and LED DRLs standard on all models
• On-sale early 2012 as a 2012 model, in both two- and four-door versions 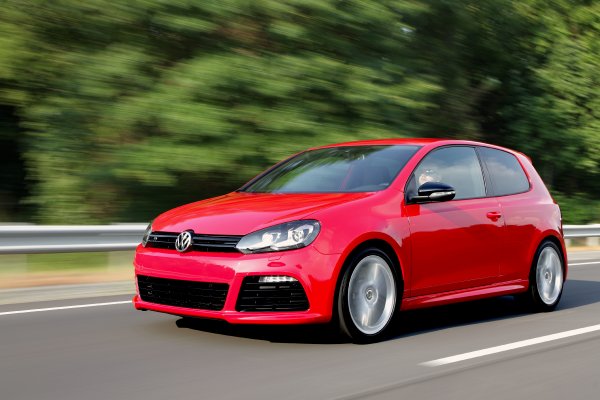 Intelligent downsizing. That’s what the new Golf R represents. The heir to the 2004 and 2008 Golf R32 models, the new R manages to have more power, more performance, and consume less gasoline than its illustrious iconic performance forebears. And it offers all this for just $33,990, plus destination, for the two-door Golf R model.

Like the previous R32 models, the Golf R is equipped with Volkswagen’s 4Motion® all-wheel-drive system: the latest generation of this system can divert up to 100 percent of the torque to the rear wheels, if needed. All Golf R models sold in the U.S will be equipped with a close-ratio six-speed manual transmission. For the first time, the Golf R will be available in two- and four-door guises as well as in two trim levels: well-equipped Golf R and luxurious Golf R with Sunroof and Navigation.

The Golf R is a refined vehicle that’s marked by clean, minimalist lines that are mixed with sharp, intricate detailing. The style is sleek and contemporary, yet timeless and elegant.

The changes made for the Golf R are subtle yet striking, in keeping with the car’s mission of providing sophisticated and understated performance. Up front, there’s a new bumper that incorporates LED daytime running lights and three large black air intakes that help cool the engine. The radiator grille is finished in gloss black and features an “R” logo that sets the front of the car apart from the rest of the Golf range. Unique Bi-Xenon headlamps that are framed in black also have the Adaptive Front-lighting System (AFS), whereby the lights turn with the steering wheel, up to a maximum of 15 degrees, to provide better visibility around bends.

The car’s streamlined profile continues toward the rear, with a pair of subtly flared side skirts running along the lower edge of the body. The new 18-inch aluminum-alloy wheels expose gloss-black-painted brake calipers that incorporate the “R” logo; the exterior mirrors also have a gloss-black finish.

There’s further differentiation at the back of the R, where a new rear bumper was needed to accommodate the central twin pipes for the exhaust system, similar to the tailpipes fitted on the original 2004 R32. The bumper also features a gloss-black diffuser. The back end is highlighted by a slightly larger tail spoiler than that of the GTI and a subtle “R” badge. The R is available in five colors: Rising Blue, Candy White, Carbon Steel Gray, Black, and Tornado Red.

Just like the exterior, the interior has been enhanced to make it even more purposeful and demonstrate its role at the apex of the Golf range.

On opening the door, the driver and passenger will note aluminum “R” kickplates on the sills, before sliding into deep bucket seats. These are adorned with an “R” logo on the head restraint and are upholstered in supple leather.

The squared-off steering wheel is also swathed in leather, with gloss-black-finished spokes that carry through from the exterior design. Other R-specific features include: blue pointers for the instruments; the shifter knob with an “R” motif; aluminum trim for the dashboard and doors; and aluminum pedals.
The Golf R comes extremely well equipped, even in base form. Fully automatic dual-zone climate control is standard, along with a multifunction steering wheel, Premium VIII audio with eight speakers, aux-in, a Media Device Interface with iPod® connectivity, and Bluetooth®. The Golf R with Sunroof and Navigation adds the RNS 315 touchscreen navigation system; a 300-watt Dynaudio® sound system; a sunroof; and Keyless Entry with push-button start.

Just like the rest of the Golf range, the R is practical and versatile. The high-lifting tailgate provides easy ingress and egress to a load area that offers 15.3 cubic feet of space. And with the folding rear seat back split 60/40—and featuring a pass-through—there’s real flexibility for load carrying.

The Golf R is fitted with the most powerful Golf production engine ever seen in the U.S. The car uses an updated version of the EA113 2.0-liter turbocharged inline four-cylinder engine, rather than the EA888 engine used in the current GTI. Like the EA888, the EA113 uses direct fuel injection and double overhead camshafts with variable intake timing. Because the Golf R develops more power and torque than the GTI—256 horsepower and 243 lb-ft compared with 200 hp and 207 lb-ft—a number of changes have been made. The cylinder block is reinforced, stronger connecting rods are fitted, and a BorgWarner K04 turbocharger is used, boosting at up to 17 psi. With manufacturer estimated fuel economy ratings of 19 mpg in the city and 27 mpg on the highway, this is the most fuel-efficient Golf R model ever sold in the U.S.

The Golf R is offered with a slick shifting, close-ratio six-speed manual transmission that features a magnesium selector housing and cable operation with very short lever movements. The latest-generation 4Motion all-wheel drive is also standard on the Golf R. This system uses a Haldex® clutch pack that continuously varies the amount of torque sent to the rear wheels, depending on whether slippage is detected at the front. In normal driving, the Golf R acts like a front-wheel-drive machine, which has benefits for fuel economy. However, if needed, up to 100 percent of the torque can be directed to the rear wheels for traction on more challenging surfaces.

The Golf R has unique calibration for its suspension, even compared with the GTI. At the front, it uses a damper-strut layout with lower control arms and a stiff, tubular anti-roll bar that combine to help keep the front tires planted during hard cornering, reducing body roll and heightening steering feedback.

At the back, there’s a compact multilink independent layout that features coil springs, telescopic dampers, and an anti-roll bar. The four-link layout features three lateral control arms—the spring mounting, the track rod and upper control arm, and a trailing link at each wheel. Suspension assemblies are attached by way of a rear-axle subframe and, as at the front, rubber and metal mountings that are soft in torsion but stiff radially are used to help ensure the anti-roll bar responds immediately and suppresses body roll effectively.

The spring and damper units are located separately on each side of the car at the rear, with the coil spring bearing directly on the trailing link and the damper attached to the wheel hub assembly. This enables the suspension geometry on the compression stroke to generate a toe steering effect that maintains neutral behavior, or some slight understeer, in all driving and load-carrying situations. It also helps ensure excellent driving stability on rough, uneven road surfaces. Stylish 18-inch-diameter aluminum-alloy wheels are shod with 225/40 all-season performance tires.

The Golf R uses a third-generation electro-mechanical power steering system that is able to vary the feel of the steering to suit the speed and driving situation. It is firm and direct when driving at highway speeds, requiring less effort at parking speeds. Other advantages of the system include its mild self-centering action, and its ability to help compensate for driving hazards like crosswinds and steep road cambers. In the Golf R, the steering ratio is quicker than the GTI’s for an even sportier on-road feel.

The brakes were modified to cope with the Golf R’s higher level of performance as compared to the GTI. Golf R gets vented 13.6-inch-diameter front and 12.2-inch rear discs, up from the GTI’s 12.3-inch-diameter vented front and 10.7-inch solid rear discs. Naturally, anti-lock brakes (ABS) are standard, along with electronic brake pressure distribution (EBS) and hydraulic brake assist (HBA). The latest version of HBA is able to discern whether the braking is “normal” or an emergency according to the speed with which the pedal is depressed. In the event of an emergency, HBA helps increase the brake pressure and activates the ABS.

The 2012 Golf R comes with an array of standard safety features. For driving security, enhancements include Electronic Stability Control (ESC), Anti-Slip Regulation (ASR), and an Electronic Differential Lock (EDL). A hill holder function automatically applies the parking brake when the vehicle comes to rest and the brake is depressed in traffic, preventing the car from rolling backwards or forwards. The brake is released once the driver presses the accelerator pedal. This is especially useful in slow traffic on long inclines.

Should the car be involved in a crash, the occupants are protected by driver and passenger front and front side thorax airbags together with Side Curtain Protection® head airbags for front and rear passengers. Volkswagen’s advanced Intelligent Crash Response System shuts off the fuel pump, unlocks the doors, and even switches on the hazard lights if the car is involved in certain types of collisions.

Like all 2012 Volkswagen models, the Golf R is covered under the no-charge Carefree Maintenance Program. All scheduled maintenance is covered for the length of the New Vehicle Limited Warranty—three years or 36,000 miles, whichever occurs first.

The base Golf R is a sophisticated and luxurious performance car, with a high level of standard equipment.

Golf R with Sunroof and Navigation

Starting at $35,490 for the two-door model, this adds: a power tilt-and-slide sunroof; Keyless Entry with push-button start; the RNS 315 touchscreen navigation system; and the eight-channel 300-watt Dynaudio® premium sound system.